Our first visit is to Chepstow Castle, situated on its rock above the swirling waters of the River Wye.  Standing guard over a strategic crossing point into Wales, this well-preserved landmark castle is probably the first stone castle to be built in Britain and one of the few to trace the evolution of medieval military architecture from start to finish.

North of Chepstow is the Wooded Wye Valley, an 'Area of Outstanding Natural Beauty' which winds its way through Tintern to Monmouth. Tintern, dominated by the soaring ruins of its medieval abbey, has attracted poets and artists for centuries. Today, it's also popular with country-lovers who follow the Wye Valley Walk or the Offa's Dyke Path in the hills above.

We then drive to Tintern Abbey, an outstanding example of Gothic architecture as well as providing a fascinating insight into monastic life in medieval times. Wordsworth was inspired by his visit to write his famous poem, 'Composed a Few Miles Above Tintern Abbey'.

We travel north through the Wye Valley to the historic Welsh border market town of Monmouth, situated at the confluence of the Rivers Wye, Monnow and Trothy.


Perhaps best known as the birthplace of Henry V, Monmouth boasts a whole host of historical sites, people and buildings from the Nelson Garden to The Town Hall. It has a medieval 13th-century bridge over the River Monnow, unique in Britain as it is the only preserved bridge of its design remaining. 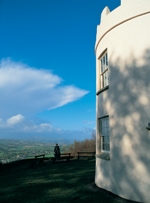 Raglan was the last medieval fortification built in Britain. Raglan was built on the site of a former Norman motte in 1435. The design combines practical strength with ostentatious style. Raglan castle is set amongst rolling border country. Once a sumptuous palace, with formal state apartments and a Great Tower, it was more a state of wealth and social aspiration than an intimidating military presence.

It acquitted itself well however, when forced into active service, enduring in 1646 one of the longest sieges in the English Civil War, before falling to Cromwell's forces and suffering at the hands of his demolition team. Even in ruin however, noble Raglan remains the finest late-medieval fortress palace in the British Isles.

The Vale of Usk

The landscape of The Marches - the Welsh border, is dominated by two rivers, the Wye and the Usk. They meander through green vales set in rolling countryside.

The entire area is idyllic touring country. Scenic roads weave across hill and vale dotted with pretty little towns and villages. Our journey takes us through the historic floral town of Usk. The town Usk stands in the valley of the same name. The Usk is a famous salmon fishing river and also has its own beautiful long-distance footpath, the Usk Valley Walk.

South of Usk, the river loops around Caerleon, a town in which King Arthur reputedly held court. Caerleon also has an important Roman ancestry still evident today in its amphitheatre, excavated bathhouse complex, barracks and museum.

Our final stop is Caerleon, one of Europe's most fascinating and revealing Roman sites. To the Romans Caerleon was known as Isca or often referred to as 'City of the Legions'. Here they created not just a military camp but also an entire township, complete with amphitheatre which, in its heyday, would have seated in the region of 6,000 people and would have been the scene of many gladiatorial games against men and beasts. Dr Mortimer Wheeler extensively excavated the remains of the Amphitheatre in 1926 and they remain some of the best preserved in Britain.

The Roman Fortress of Isca was the permanent home of the Legio II Augusta, named after the emperor Augustus who had raised or possibly reformed the second legion. The site was first occupied cAD75 by Sextus Julius Frontinus who had been instructed by Emperor Vespasian to pacify the Welsh and the site he chose provided an easily defendable area with good access down the Usk estuary, for essential supplies by sea.

The variety of remains on view in Caerleon is unparalleled within the British Isles, providing us with a vivid picture of life in Roman Britain almost 2,000 years ago.