Our journey towards The St. David's Peninsula brings us to the western tip of Carmarthenshire and the ancient town of Laugharne, with its 12th century castle once painted by Turner.

The Heritage coast stretches 50 miles, following the rugged contours of St. David's Peninsula from St. Brides Bay to Fishguard. The peninsula blends history and scenery to better effect than just about any area of Britain.

Composed of low, gentle hills, but strewn with jagged rocks below sharp cliffs, with treacherous tides and strong winds common companions, the magnificent coastline of the St David's Peninsula in the far West of Wales with sandy beaches, dramatic cliffs, coves and harbours, is truly a land for all seasons.

We take a scenic drive taking in Newgale Sands - a broad expanse of sand exposed to the Atlantic gales and Solva, a picturesque village built around a fine natural harbour where there was once a direct passenger service to New York!

The City of St. Davids

St. Davids, a favourite location of artists, travellers and pilgrims, is the smallest city in the United Kingdom, with a population of just over 1600.  It is situated on the far south west coast of Wales and is the birthplace of St. David, the patron saint of Wales, who established the Christian tradition in the 6th century.

Granted city status by Queen Elizabeth II because of the presence of the cathedral, St. Davids is in reality a small attractive village, situated within the Pembrokeshire Coast National Park and surrounded by spectacular coastal scenery renowned for its natural beauty. 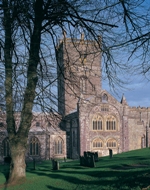 St. Davids' Cathedral is a magnificent building , situated in a grassy depression below the city. A serene yet majestic sight.

St David, the patron saint of Wales, was one of the earliest Celtic missionaries who sought to convert the barbaric tribes of western Europe to Christianity. He founded a monastery on the site where the cathedral now stands in AD 589. After Pope Calixtus canonised David (or Dewi as he is known in Welsh) in 1120, the site became a major place of pilgrimage. Bishop Bernard dedicated the cathedral in 1131 and construction work began in 1181.

St. Davids' Cathedral  was a popular pilgrimage destination throughout the middle ages, and indeed remains so to this day attracting thousands of visitors every year.

It is not only the final resting place for the Saint himself but contains the tombs of both the great Lord Rhys of Deheubarth and his son Rhys Gryg.

Adjacent to the cathedral stand the magnificent ruins of the medieval Bishop's Palace, built by Bishops Beck and Gower around the beginning of the fourteenth century.

The Cathedral and Bishop's Palace are marvels of medieval architecture, all the more striking for the remarkable tranquillity of this remote setting.

We then drive a short distance to St. Non's Bay. St. Non was the mother of David, the man destined to become the Patron Saint of Wales.

St. David was born in the 6th century and it was here that St. Non reputedly gave birth to David on the site of the original ruined chapel, which is said to be the oldest Christian monument in Wales. Near the chapel is a holy spring that miraculously appeared at the moment of the birth.

St. Non's has received pilgrims for centuries, resulting in the present St. Non's Chapel being built in 1934. This beautiful, yet simple chapel was constructed from the rocks of ruined houses, which, in turn, had been built from the stone of ancient, abandoned churches.

This must be one of the most idyllically situated monuments in Pembrokeshire, overlooking, as it does, the rocky coastline above St. Non's Bay.

It is here we take a short walk on The Pembrokeshire Coast Path, which crawls around almost every part of the coast, winding 186 miles from Amroth in the south, to St. Dogmael's near Cardigan in the north of the county.

What makes the Pembrokeshire Coast Path so interesting is the variety of landscapes you pass through on your way along it, ranging from steep limestone cliffs, undulating red sandstone bays, volcanic headlands and flooded glacial valleys.